News and Resources for those Who Live in the Neighborhood

Lafayette Square residents have many education options including Saint Louis Public Schools (SLPS)-- and a wide selection of charter, independent, and parochial schools around the St. Louis area.

The Catholic Archdiocese of St. Louis operates more than 100 schools in the area.

The Citizens’ Service Bureau (CSB) is the customer service department for the City of St. Louis.

Have the exact street address where the problem is occurring (or intersection if it is a traffic problem) and be prepared to give an accurate description of what you have observed.

After filing your request, CSB will give you a service request number and let you know which City department is going to respond to this request. You will receive a date by which they expect to have a response from that department. A response may indicate completion of work or it may indicate that an inspection has been completed and the responsible party (usually the property owner) has been issued a violation notice. Either way, you may contact CSB after the target response date to find out the status of your request. You may also find basic information about the status of your request on-line.

For Non-Emergencies, contact the St. Louis Metropolitan Police Department at 314-231-1212. 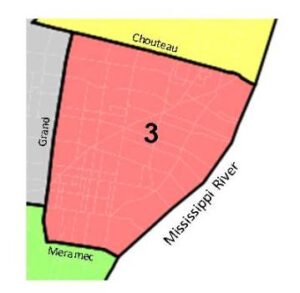 Meetings are held every three months (March, June, September and December) on the second Thursday at 7:00 p.m. at the Five Star Senior Center located at 2832 Arsenal. Due to COVID 19, meeting details are subject to change.

Your voice matters. Find out more about who represents The Square.

The Substation provides a comfortable stopping point for police officers to file reports and take a break. The LSRC believes the substation provides substantial benefit to the residents of the Square as well as to our visitors. Our Substation is located at 1927 A Park Avenue. The Lafayette Square Substation is underwritten by the Lafayette Square Restoration Committee. Special thanks to Looking Glass Designs for subsidizing the space from 2010-2013 and to Chris Goodson for subsidizing from 2014-2017. Thanks also to the many residents and businesses owners who have contributed since its opening in 2010.

You can help support the cause by making donations of food and drinks for our officers.

​To arrange for pick-up, contact Scott Jones at scott@pwcap.com. Please include a receipt with your name and address if you would like a letter for your taxes. Thank you!

The Lafayette Square Community Garden, created in 1997 at the corner of Park and Dolman Avenues in Lafayette Square, provides a site for residents to grow fresh healthy foods, fresh flowers, and herbs in the company of friends and neighbors. It stimulates interest in gardening and promotes a sense of community and environmental awareness. Gardeners have grown a multitude of vegetables, herbs and annual and perennial flowers; there have been paper makers, natural dye makers and herbalists give demonstrations. Whatever your interests, we welcome you to join us on a first come, first served basis.

As part of this cooperation with the Land Trust, we made these agreements:

To request a plot in the Community Garden you can email us at garden@lafayettesquare.org

by Linda Weiner and Steve Fliesler*

The story of the Lafayette Square community garden is intimately tied to the redevelopment of the Lafayette Square neighborhood of St. Louis, Missouri. Lafayette Square enjoyed its heyday during the 1870’s and 1880’s as the “Beverly Hills” of rich merchants and traders who had made their fortune along the Mississippi River. It is home to Lafayette Park, the first public park in the United States west of the Mississippi, then and now a focal point of the neighborhood. In 1896, a tornado ravaged the community and triggered a westward move of the elite. The stately Victorian homes slowly became dilapidated and abandoned as the inner city of St. Louis engulfed them, while suburbia sprawled further west. In the early 1970’s, a few daring people envisioned the restoration of the neighborhood. Three-story remnant homes (“shells”) could be bought for as little as a thousand dollars and were fully rehabbed over the years by successive waves of restorationists. By the year 2000, nearly all of the homes around the central park and surrounding three-block radius were fully restored.

As part of the revitalization, avid gardeners and others volunteered to beautify the neighborhood by restoring Lafayette Park, including its park house, grotto around the pond, and its rock garden on the West side of the Park. The gardeners began spreading their “green revolution” around the neighborhood, transforming abandoned lots into orchards and native grasslands. In 1997, this boundless band of agrarians decided to build a community vegetable garden, embracing the dream that, one day, they would sink their teeth into firm, juicy homegrown tomatoes and pick fresh basil, oregano, and other herbs right in their own neighborhood. Word spread like wildfire and a core group of 14 gardeners, comprising a diversity of race, gender, and sexual orientation, met, decided on the site, drew plans, and wrote a variety of grants to Gateway Greening, Operation Brightside, and the St. Louis Regional Arts Counsel, and also raised private donations. The grants were approved (a total sum of $20,000), the plans were approved by the Lafayette Square Restoration Committee (LSRC, the neighborhood organization), and the garden was set to be built.

On a brisk day in March of 1997, the materials were delivered and these fearless gardeners marched onto the then eastern edge of the neighborhood, beyond which were sites of urban decay: the haunting shadow of the abandoned old City Hospital, the high-rise public housing projects, and many weed-ridden, garbage-strewn abandoned lots. The chosen lot at the corner of Park Avenue and Dolman stood empty, awaiting its makeover. In one weekend, 19 garden beds were built and filled with composted soil provided by the city.

Each weekend for six consecutive weeks, a new task was accomplished under the relentless leadership of Linda Weiner whose early Saturday morning phone calls were the dreaded bugle call to work. A picket fence was erected over the course of two weekends and stained the next. The post holes for the fence were particularly difficult to dig, because the stone foundation of a building that previously stood on the lot interfered. A 175-foot long perennial border was planted with donations from the Missouri Botanical Garden and Gateway Greening’s “Great Perennial Divide.” A brick patio was built as the next step, and the construction of a pergola was contracted to local carpenters Paul Iskovich, of Lafayette Square, and his business partner in M&I Woodworking. They also built benches overlooking the garden. Finally, an herb garden was established around the perimeter of the brick patio, using herb plants donated by the Webster Groves Herb Society. It’s a wonder any gardener had time to plant his or her own vegetables! However, by late August of 1997, the gardeners did celebrate the fruits of their labor at a wonderful garden party, to which the rest of the community was invited to share in the delight of this new oasis in the neighborhood.

Subsequently, additions and improvements to the Lafayette Square community garden were made. In 1999, local artist Andy Cross, noted scenic artist for the St. Louis Muny Opera Company and also a gardener from another St. Louis neighborhood community garden, was commissioned to paint a mural depicting a Victorian garden scene on the wall of the building immediately adjacent to the garden on its western border. Paints and materials were purchased with a $2,500 grant from the St. Louis Regional Arts Council, as well as additional donations from Ameren UE, neighborhood businesses and individuals. This beautiful mural now serves as the backdrop to the brick patio and pergola. A cutting flower garden was added along the lawn area. Four additional beds were added in 2004 by Roy Peterson, one of the founders of the garden. An adjacent, grassy field just north of the community garden was planted with fruit trees largely due to the efforts of David “Kingpin” Bown, transforming the once barren lot into a flourishing community orchard. Now termed “The North Garden,” several new beds were added there, and in 2013 the lot became an official part of the community garden. In 2016 another five beds were added to the main garden. There are currently 46 beds between the two gardens. When new home construction near The North Garden required demolition of fruit trees, the new owners agreed to plant a new row of fruit trees nearby to replace those that were removed.

In January, 2008, the Lafayette Square Community Garden was purchased from the St. Louis City Land Reulitization Authority and placed in trust with the Gateway Greening Land Trust. It will be kept as a garden maintained by the community of Lafayette Square in perpetuity as long as it is well maintained. In 2013 The North Garden parcel was added to the Land Trust.
Over the years, the Lafayette Square community garden has garnered numerous awards and recognition. In 1999, it won First Place in the Gateway Greening Urban Garden Contest, as well as an Honorable Mention for the watering system design (the brainchild of Paul Sauer, then LSRC President). The garden received an Honorable Mention in 1999 and Third Place in 2000 in the St. Louis Post-Dispatch Great Garden Contest, for Best Garden. Subsequent awards have included First Place (2001), Third Place (2003), Second Place (2004), and Honorable Mention (2006) in Gateway Greening’s Urban Garden Contests, for Established Community Garden; and Third Place (2004) for Best Scarecrow in the Gateway Greening Urban Garden Contest. In addition, the garden was one of five gardens mentioned in an article on endangered urban gardens in Fine Gardening Magazine (notably featuring Rosalie Truong, a founding member of the Lafayette Square community garden). The garden also was a designated stop on the 2004 Statewide Master Gardener’s Annual Meeting Tour, and on the 2005 Missouri Botanical House Garden Members’ Tour, and is an annual destination for the Lafayette Square Spring Home and Garden Tour.

Today, the Lafayette Square Community Garden stands as a gem on the eastern boundary of the neighborhood, a further testament to the energy, vision, and commitment that helped to restore the beauty, grandeur, and vitality of a once nearly vanquished neighborhood.

To request a plot in the Community Garden you can email us at garden@lafayettesquare.org

Coming Soon: A calendar of events for neighborhood residents.

Here are blog posts of particular interest to residents...

Perfectos Improvise During a Rain-out

Although Lafayette Square’s vintage base ball field was scheduled to host a match between the St. Louis Perfectos and the St. Louis Unions (home field: Jefferson Barracks) on Saturday, May…

Exciting Changes Coming to the Plaza!

If you’ve noticed that Park Avenue is closed to traffic at Truman, and that the Plaza is under construction, you may be wondering what’s going on. Well, construction is finally…

Support the LSRC when you shop at Amazon!

Great news – the Lafayette Square Restoration Committee is registered with Amazon Smile to earn a donation for a fraction of the price of each item purchased. Amazon Smile is…