Stories, Photos and Other Treasures from Our Archive

Excerpts from "A Walk Around The Square" by Thomas Keay

Lafayette Square is a reminder of Victorian St. Louis in its most flamboyant years, the last quarter of the 19th century.

Lafayette Park is the focal point of the Square, a last link to the little French settlement of 1764. It is an extension of the St. Louis Commons which was reserved for public use as pasture and farm land in the European tradition. It remains the only land within the city never under private ownership.

The 30 acre park was platted in 1836, making it not only the oldest of city parks, but also the first park west of the Mississippi River. The name commemorates the popular hero of the American Revolution who visited St. Louis in 1825. For some years the area was considered too remote for practical residential development and locally the park was known as "Grimsley's Folley". Colonel Thornton Grimsley, a member of the Board of Aldermen, enthusiastically supported retaining a portion of the Commons for the enjoyment of all the citizens of St. Louis. With a population of less than 16,000 and municipal development hardly past the present Fourteenth Street, the public's pessimism is easily understandable.

The city made few improvements in Lafayette Park in the 1840's and 1850's, but by 1860 the population of St. Louis had increased 900% over the previous 20 years. During the prosperous post-Civil War years, Lafayette Square became one of the most fashionable neighborhoods in St. Louis and its park became the most popular recreation spot in the city.

But by the 1890's newer St. Louis neighborhoods developing to the West were enjoying increased popularity. The devastating cyclone of May, 1896 hastened the Square's decline. Destruction to the park and surrounding residences was so extensive that many entrenched families apparently decided to join the migration.

By the 1920's the neighborhood around Lafayette Park was a neglected, slightly disreputable part of the Near Southside. Many splendid dwellings became rooming houses and multiple units occupied mostly by transient renters.

The grandeur of Lafayette Square remained only a faded memory and some distinguished structures failed to escape the wrecking crews. Even so, amid the decay and neglect, the neighborhood never entirely relinquished its Victorian charm and unique character.

In the late 1960's a small core of individuals with a fondness for old homes entered the scene. Eager to accept challenge, they organized the Lafayette Square Restoration Committee and encouraged others to discover the rewards of restoration in a cosmopolitan urban atmosphere.

Subsequently, Lafayette Square has enjoyed a resurgence unparalleled in St Louis during an era of mass exodus to the suburbs.

In 1972 the city acknowledged, by ordinance, Lafayette Square as its first historic district. In 1973 the U.S. Congress placed Lafayette Square on the National Register of Historic Places. A Historic Code preserves the neighborhood for future generations to see and enjoy.

We are about five minutes from Downtown, ten minutes from the Central West End, and twenty minutes from Lambert International Airport. Lafayette Park is the heart of the neighborhood, with old and new homes surrounding. Our main historic Business District sits along Park Avenue, just west of Truman Parkway, plus several excellent restaurants along Mississippi and Chouteau. 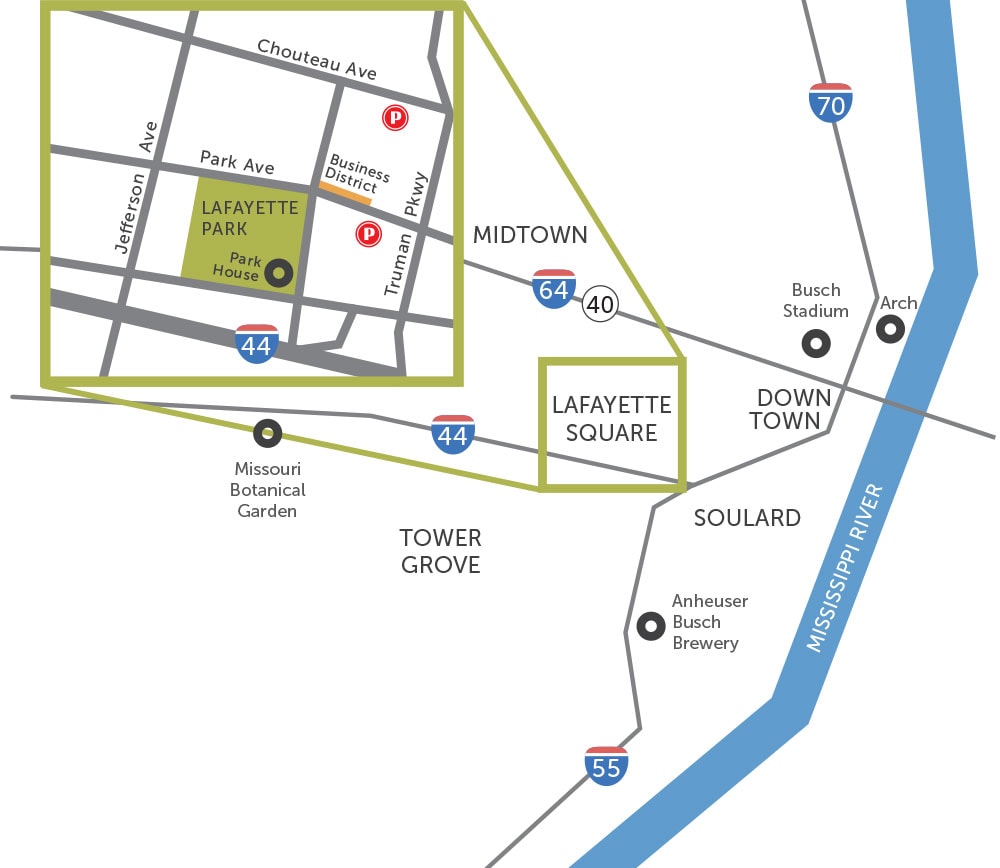