Your Help Keeps the Square Vital and Vibrant

Give Back to The Square

You can support Lafayette Square in a variety of ways. Whether a general donation or adopting a bench, your support helps ensure the beauty and growth of The Square. Click the link below to learn about opportunities to give back.

Make a one-time gift via credit card to support The Square. You can designate that your gift support a specific initiative or you can give to the General Fund to provide broad and general support for the Square.

With a recurring gift, you designate a monthly gift amount, and we automatically charge your credit card. This is a great way to provide ongoing support for The Square and/or automatically spread a larger gift across many months.

The Fountain Park Plaza is home to about 15 benches which offer a view of the stone fountain or landscaped areas of our small park at the heart of the historic business district. The Adopt a Bench program enables the Lafayette Square Restoration Committee to maintain these benches for years to come. 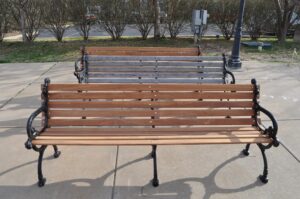 The benches were installed over 12 years ago, when the Plaza was redeveloped from a junkyard to the beautiful public space it is today. This bench restoration project, complete as of mid-2015, replaced the oak slats with ipe wood, a high-quality material known for its durability and resistance to rot. Ipe’s longevity is estimated at 25-50 years. The metal bench frames were repaired and refinished. Hardware was replaced. The “new” benches have been installed on the new permeable pathways facing the garden areas or surrounding the fountain.

Your donation of $800 pays for the restoration, plaque, and reinstallation of your bench. In honor of your donation, the LSRC will place a personalized plaque of approximately 4″ x 2″ on each bench. You can choose your bench, so the sooner you order, the more options you’ll have.

Your donation is tax deductible to the extent that the law allows. A letter will be sent to verify your donation amount.

Please check the box below to confirm you wish to donate $800 to adopt a bench. After we receive your donation, we will contact you to discuss details regarding your personalized plaque.

Thank you for your support of our neighborhood beautification efforts!

Would you like to honor a loved one in a very special way? Is there a birth or wedding in the family you’d like to memorialize? Perhaps you would love the opportunity to commemorate your years in Lafayette Square? The Square’s Commemorative Brick Program provides a chance to show your support of our historic neighborhood. You may be a lifelong resident, a “newbie”, a business owner, or a visitor to the Victorian neighborhood of Lafayette Square. Regardless, you’ve probably enjoyed the beautiful Park Plaza, home to the stately stone fountain. For the last decade, the Park Plaza, located in the heart of the business district, has become a place for celebration and special events. The Fountain Park Plaza commemorative brick patio will be located in the northwest corner of the Plaza, and our brick program is a fundraiser for the ongoing maintenance of that area. The LSRC intends to continue our beautification efforts to ensure the Fountain Park Plaza will be an attractive community asset for generations to come!

Details
We’re offering two sizes of bricks: Standard bricks are 4” x 8” with three lines of engraving, for a fee of $100. Large bricks are 8” x 8” with six lines of engraving, for a fee of $200.
Orders will be inscribed in batches once a minimum quantity has been met. The first 50 bricks are to be engraved and laid in the Spring of 2015.
Bricks may be inscribed with a combination of uppercase and lowercase letters.
Your donation is tax deductible to the extent that the law allows.
You will be notified of location and dedication of your brick.
How to order
Click here to order online through our partner Bricks ‘R Us. You will be taken to an online form on their website which will forward all of your information and payment to us.

If you have questions or prefer to pay by check, please contact Danny Schuette at danny.schuette1@gmail.com.

Help restore and preserve The Square by becoming a sustaining member of the Lafayette Square Restoration Committee. We offer various levels for individuals and members -- with great perks for those who become members.

A Great Way to Help

So much of what people admire about the Square is made possible by the dedicated volunteers who live here. Everything from the fountain in the Plaza on Park Street, to the historic street signs, to the beautiful pillars that frame all the streets into the neighborhood are the result of private donations, membership dues, and volunteer labor.
We invite you to be part of the volunteer task force that keeps our neighborhood vital and blooming! No matter your talents, or the time you have available, your efforts will be welcome and appreciated.
Fundraising
Beautification
Communications / PR
Events
Professional Services
Community Development
Fundraising
Funds raised by the LSRC underwrite everything from major capital improvements and maintenance, to added safety measures, to supporting community service and outreach within the Square and adjoining neighborhoods. Opportunities include:
Beautification
We cherish the natural and architectural beauty that surrounds us in The Square. It takes a village to maintain and enhance that beauty. Join us if you have a green thumb, are handy with a paint brush and tools, or simply want to join in the effort to keep The Square beautiful. Opportunities include:
Communications / PR

Help us spread the word about The Square and all that it has to offer. Opportunities include:

We host a variety of annual and more frequent events for which we always welcome volunteers. Opportunities include annual House tour and concerts.

We welcome those of you with legal, financial, accounting or other professional skills to volunteer. Opportunities include:

Those of us who live and work in The Square are part of a great community. We work hard to nurture and build that community, and we welcome your help. Opportunities include:

The Lafayette Square Restoration Committee (LSRC) is your neighborhood association! We are a not-for-profit organization, which seeks to facilitate the preservation and redevelopment of Lafayette Square, respecting its special historic character and enhancing its overall livability.

We keep you entertained all summer long!

The mission of the Arts Council of Lafayette Square is to use visual and performing arts to connect the diverse socioeconomic communities of the greater St. Louis region. We will accomplish this by sponsoring a variety of events to encourage the exchange of ideas, collaboration with civic partners, and outreach to those who do not routinely have access to the arts. These actions will contribute to the revitalization of the city, strengthening of community bonds, and creating a lasting appreciation of the arts.

If you would like to help support the mission of the Arts Council through a donation of time, talent or funds, please see our donation or volunteer forms.

We appreciate your support!

Please check the Events Calendar for the latest information on concert schedules.

The Lafayette Park Conservancy (LPC) was founded in 2001, on the 150th anniversary of the creation of Lafayette Park in Saint Louis, Missouri. The Conservancy’s mission is to preserve and restore the park’s historic legacy, and to raise funds for those purposes.

Lafayette Park was originally part of the St. Louis Common, a public pasture established in the 1760’s. When the Common was broken up and sold in 1836, thirty acres were reserved as a public square.

Established by city ordinance in 1851, Lafayette Park is the oldest developed urban park west of the Mississippi River. Because the park was used to drill local militias in its early years, it became known as the Parade Grounds. During the Civil War the park served as a campground for Union troops.

Near the end of the war, Maximillian Kern, a renowned landscape architect, was appointed Superintendent of Lafayette Park. Kern’s designed a Victorian strolling park that featured free band concerts, swan boat rides, impressively maintained floral displays, and the Grotto.
The great tornado of 1896 devastated Lafayette Park and the surrounding neighborhood. While some families rebuilt, others moved further west.

The upcoming 1904 World’s Fair established Forest Park as the premier St. Louis park, hastening to the decline of Lafayette Park. Lafayette Square declined until the late 1960s when urban pioneers began to buy and restore its fine homes.

Today, Lafayette Square is one of the premier St. Louis neighborhoods. The restoration of Lafayette Park provides a beautiful and historically important focus for the area.