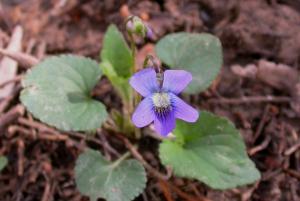 Doesn’t it seem like the scariest tales often involve something one wouldn’t associate with a threat, something pleasant to the eye, that wouldn’t hurt a fly.

When we lived way out in South County, Pat came in beaming one spring morning, delighted by the little blue flowers that had appeared in our lawn.

Not knowing better, I celebrated it too, and observed her request to put off mowing a few days to better enjoy the tiny blooms.

They came back the following year, in greater profusion.  In certain spots they appeared to be competing with the grass for coverage. It was in our third spring that I received my first advice from a neighbor with real horticultural chops, that the wild violets had overtaken our lawn, and that I’d play hell trying to get rid of them once they were firmly established.

I ran to Google and learned that we had entered a Twilight Zone. The common wild violet (Viola sororia) is an innocuous looking monster. It has waxy leaves that enable it to resist most herbicides. The violet can reproduce sexually through pollination, forming seed pods that open in the early summer and dumping dozens of potential baby violets, or asexually, through thick roots called rhizomes. Any attempt to pull up the plant that leaves the tiniest bit of root results in the regrowth of the violet. It is also a perennial weed, capable of crowding out a lawn entirely over the course of several years.

It seemed that the chemicals mentioned for treating the problem would prove toxic to children and pets and most likely grass, in addition to requiring repeated application. One piece of advice I read recommended applying and reapplying Roundup in an attempt to wipe out everything, then replanting the lawn. A scorched earth policy with an army surplus flame thrower might do as much good. 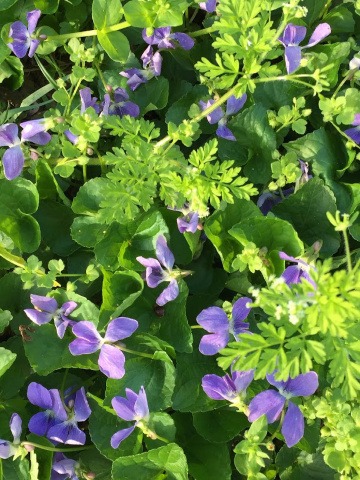 Noting that the violets had already begun outcompeting the grass for primacy in our yard, it struck me that boosting the ability of the grass to battle the violets might help, I called one of those lawn companies that fill suburban mailboxes with green promises every summer. The representative said he’d seen this problem many times, and would apply a special blend of violet inhibitor and grass stimulator. What could possibly go wrong?

And it kind of did seem to be working after a couple months. We had some drying and curling violet leaves, and grass about two shades darker. The lawn expert (Kevin) said we were developing a strong grass root system that could stand up to the violet challenge. “Go get ‘em, Kevin”, we cheered.

The development of some patchy loose grass several weeks later alerted us to the fact that grubs had discovered our newly rich source of grass roots, a favorite food. Now we had to raise our game with our lawn expert to include battles against both violets and grubs.

Walking over our lawn one day that same summer, we were struck by several new raised tracks of grass in our front yard. I could step on them and tamp them back down. Moles had discovered the presence of the grubs, and were tunneling down makeshift buffet lines in front of our house. We called a guy who went by the name “Mole Man”.

While his wife waited in his old faded Chevy, Mole Man pulled several traps from his trunk, plus a dead mole in a bag. He tried to hand it to me, promising that he would not only kill our moles, but deliver us the remains. “How can you trust anyone who won’t prove their results to you?”, he asked. Seemed right to me, so we proceeded.

And he got two,  even removing the corpses for no extra charge. We kept his refrigerator magnet, featuring a belly-up mole with ‘x’s for eyes, on display in our kitchen for some time.

After throwing several more months of service fees at our lawn expert, we discovered what proved the best solution to our dilemma. We listed and sold our home.

It was a full year after we moved that my former horticultural neighbor told me that the new owners yard was a plague of wild violets. I could only sigh and be glad for our Lafayette Square townhouse boasting no grass at all.

I’d mostly forgotten about this nasty episode until this spring, walking in Lafayette Park. Walking our dogs, a friend remarked at how pretty the blue carpet of wild flowers looked. I failed to share his enthusiasm, though the contrast with the new redbud blooms was striking. 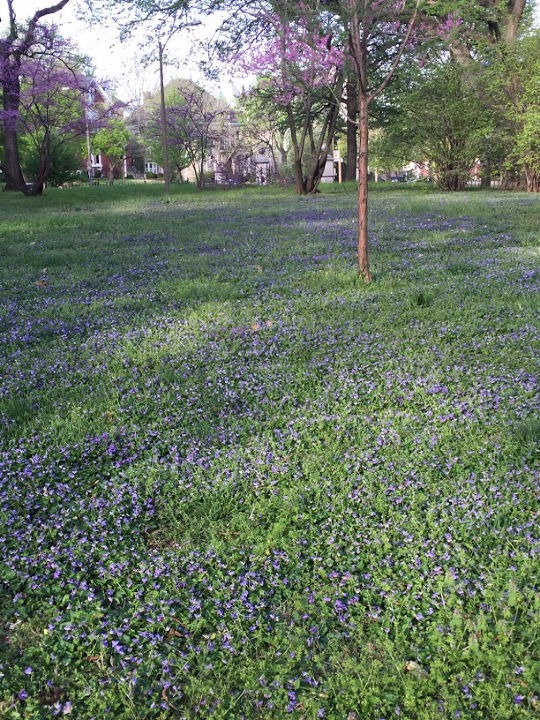 A plague of wild vile-lets.