The corner of Lafayette and Missouri Avenues shares the same multi-address feature of the Sheble-Bixby house at Mississippi and Lafayette. It contains 2166 Lafayette Avenue, and 1700  and 1706 Missouri Avenue. While a single mansion, it was once part of the residential estate of local physician Dr Joseph Spiegelhalter and his six children. 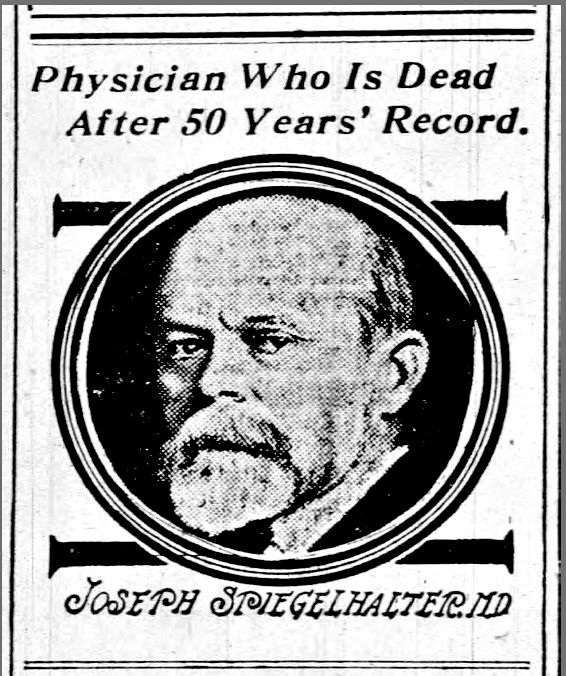 Spiegelhalter was born in Germany in 1834, and settled in St. Louis at the age of 20. He graduated medical school in 1862, and joined a Missouri volunteer infantry for the remainder of the Civil War. Returning to practice afterwards, he was appointed city health officer, and served as coroner for four years. Speigelhalter was also a member of the St Louis Board of Health for 11 years. He was one of those restlessly busy Germans common to South St. Louis, engaged in the Liederkranz singing society and Mercantile Trust Company. He somehow found time to act as president for both the Missouri Crematory Association and St Louis Swimming School. He died at home in 1909, following a long illness. Dr Spiegelhalter had practiced medicine from Lafayette Avenue for a full half-century.

The imposing house he left behind on Lafayette is an example of Richardsonian Romanesque architecture. It was at peak popularity when the home was built in the late 1880’s. Other examples from the same period are found nearby at 2126 Lafayette, and 1605 and 1525 Missouri Avenue. The influence dates back to the 11th and 12th century Roman architecture found in southern Europe, a clear departure from the earlier French Second Empire style of the 1870s homes in Lafayette Square.
The photo below is from William Swekosky in the early 1940s. The estate was sold in 1918 and by the 1930s, 2166 Lafayette had become a boarding house. The corner entrance below the turret was a delicatessen and a barber shop lay around that corner – a barber pole stands out on the sidewalk. Note the competing signs for Coca-Cola and Cleo Cola out front. There’s a story here. 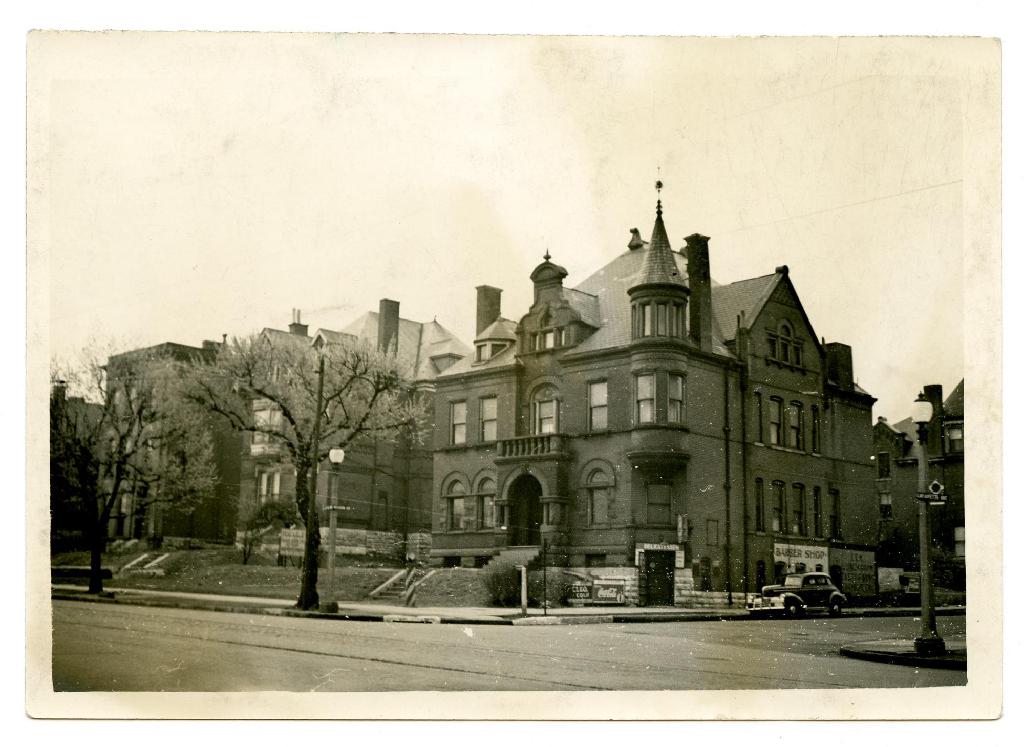 Sylvester Jones leaned on his nickname when he formed the Vess Soda Company in 1916. His flagship brand was Whistle orange soda, launched in 1925. When the Depression set in, the company ran into financial straits and sold to Donald Schneeberger. The new owner was a marketing whiz, and supposedly named a new drink after his favorite cigars, Antonio Y Cleopatra. Cleo Cola was born.

Cleo Cola employed a unique and rather saucy motif compared with Whistle and Smile. A scantily clad Egyptian queen lounged on the label, and the oriental script somehow confused the Far East with the Middle East. 12 ounces for a nickel was standard in the soda world in that time. Pepsi Cola had a jingle during the same time that went:

Pepsi-Cola hits the spot
12 full ounces; that’s a lot,
Twice as much for your nickel too,
Pepsi-Cola is the drink for you.

The soda business was competitive, and the extra boost of caffeine proved a winner in wartime; cola went everywhere with the armed forces and was eagerly consumed  in factories and on farms. The market got contentious enough that Coca-Cola sued Cleo Cola for patent infringement in 1944. Winning the lawsuit, it forced Cleo into an early retirement. Vess carried on as the “billion bubble beverage.”

2166 Lafayette sat impassively as this stuff transpired. It had its own issues to deal with. By the 1930s it became the Missouri Hotel, a long term boarding hotel. By the 1950s it had descended into a fairly disreputable regard, and there are news accounts of robbers and counterfeiters getting caught with the goods there. Lack of citations raise doubts about the Missouri being a full-fledged bordello, but it almost certainly served as a house of assignation; a place where short term carnal interludes could be accommodated. The sheer weight of stories from neighborhood veterans of the 1970s about the streetwalkers and cruising johns is compelling. Lafayette Avenue was becoming, de facto, a leafier version of Washington Boulevard’s Stroll. One story features neighborhood leader Dennis Mertz photographing license plates, and using his legal skills to identify the car owners; then sending post cards notifying the guilty of their recognition within the neighborhood.

In 1986, Post-Dispatch columnist Elaine Viets, with her ear always tuned to the heartbeat of the South Side, weighed in with an article on the end of the “House”. She was intrigued by the opportunity to tour the Missouri Hotel, now converted to condominiums, available to visit as part of the Lafayette Square Holiday Parlor Tour.

Viets interviewed the new owner of the building, Bob Kraiberg, who told of a neon sign out front that was used as a “vacancy/no vacancy” indicator. He tried to retain the sign, but occasionally someone would drift in seeking an hourly rate, and he finally removed the sign to discourage this kind of association. Asked if he would rather have yuppies or prostitutes, Kraiberg coolly replied that yuppies wouldn’t ring the bell after midnight. 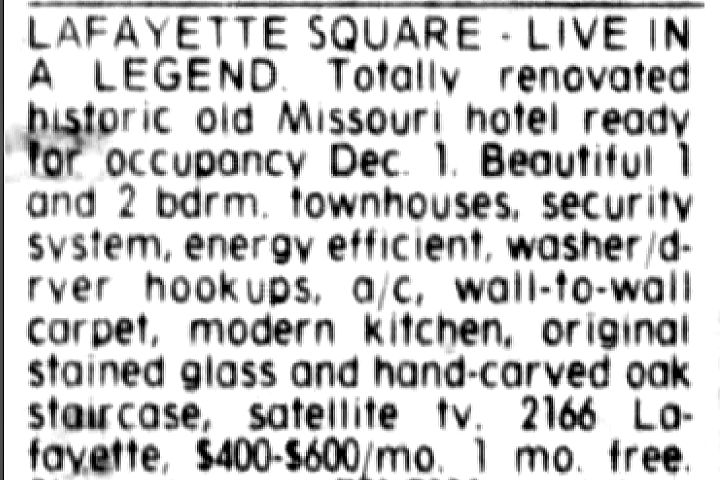 The new ownership did trade in the building’s unsavory legacy, listing the newly created seven apartments as the opportunity to “live in a legend.” It converted to condo in 2006, and so it remains today.

Reputation is one thing, of course, and appearance is another. If you again reference the photo of 2166 Lafayette above, you might initially fail to recognize it today, as it underwent a face lift in the 1950s. 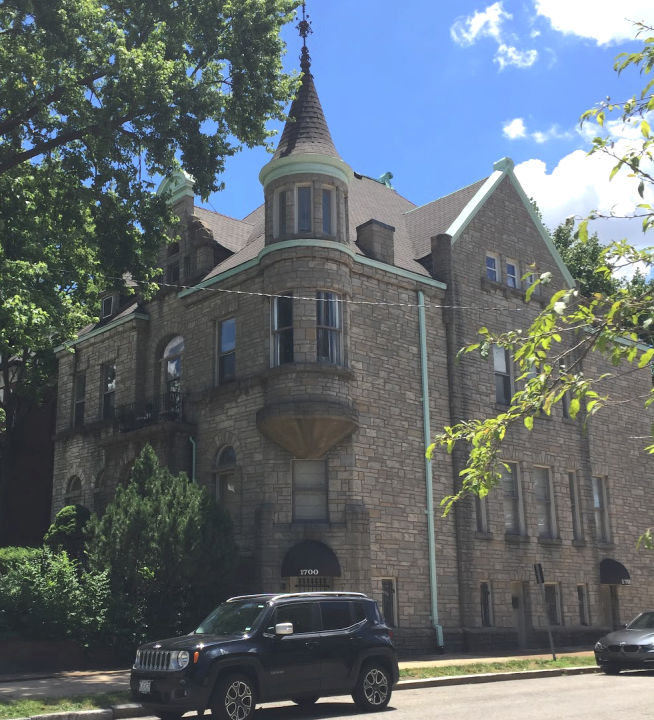 Permastone is an affront to historical architecture. It was patented as a glopped on process in 1929, and became a fad for updating or unifying the look of brick structures. Baltimore, weirdly analogous in many ways to St. Louis, was particularly beset with a wave of facade cover-ups. Film Director John Waters called Permastone “the polyester of brick” and made a documentary of its history. His co-producer mused about adding Permastone to her fathers gravestone to lend that kitschy Baltimore look. It’s now prohibited from being applied on St. Louis landmarks, but there are a couple of notable Permastone examples, among the limestone and brick facades in the Square. We live with our mistakes, same as our successes. 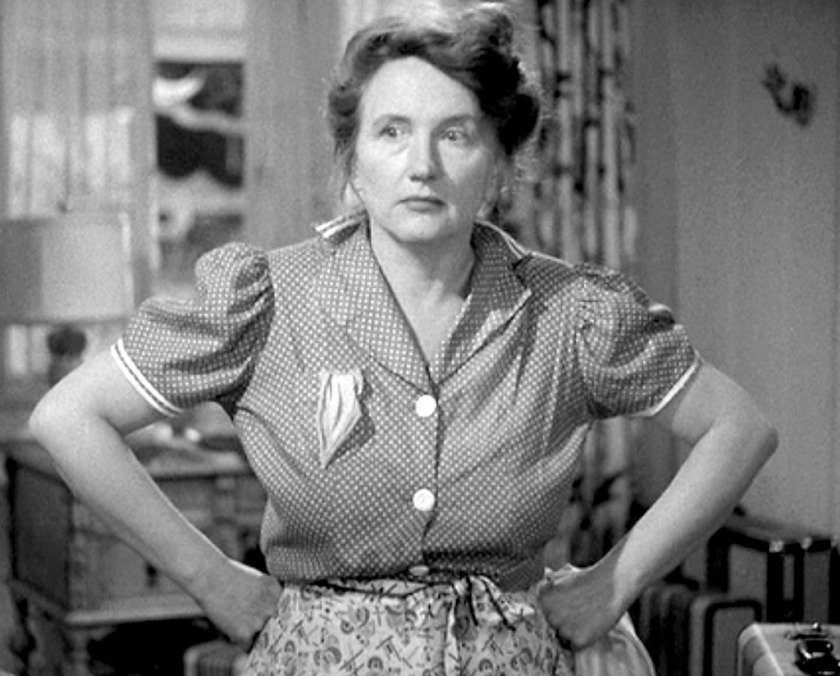 There are still those who cling to the unsubstantiated folklore of a full fledged red light house at 2166. Anecdotally, there were 30 ‘cribs,’ each with a sink, removed from the building when it was rehabbed. During the 2011 Holiday House Tour owners of the small bungalow next door, about to put their home on sale, waxed poetic about the former owner, Marjorie Main, reputed to be the madam sneaking off to the big house via underground tunnel  “maintaining plausible deniability for thirty years,” and so on. They may have been ginning up interest in the bungalow, but one never knows.  Marjorie Main might have been an obscure winking reference to an actress of the same name, who starred in 10 Ma and Pa Kettle movies in the 1940s and 50s. The Kettles had 15 kids, which could have nicely filled the Missouri Hotel. Then again, Marjorie Main went on to be fairly type cast as a classic boarding house owner. This, from the Globe Democrat in 1946:

Boarding house, burlesque, bordello…it was a furtively racy world back then, and we might never be sure of the truth of 2166, but it does make for great speculating.

Thanks to research sources, including:

Paul K. Williams runs an excellent blog called The House History Man, mostly dealing with the interesting architecture of the Washington DC/Baltimore area. His treatment of Permastone and Formstone is well worth the read. http://househistoryman.blogspot.com/2012/02/history-of-formstone-permastone-love-it.html

A good primer on Richardsonian Romanesque architecture can be found at https://www.oldhouseonline.com/house-tours/richardsonian-romanesque-architecture-interiors

For the completist only, a recap of the Coca-Cola vs Cleo Syrup Company lawsuit can be found on Casetext at https://casetext.com/case/cleo-syrup-corporation-v-coca-cola-co

Elaine Viets article was taken from the St Louis Post-Dispatch of December 11, 1986.

An article worth the review is from the Post-Dispatch of May 1, 1977, entitled “Sin Rears Its Ugly Head As New Problem In Lafayette Square.” It blames county residents for the uptick in prostitution, and contains some sensational accounts from the St. Louis Metro Police Vice Squad. The LSRC met and took exception to the article, calling prostitution “more a nuisance than a problem,”  and Elizabeth Cook wrote a letter to the editor on May 23, citing low overall crime and the attractiveness of the Square to potential home buyers.