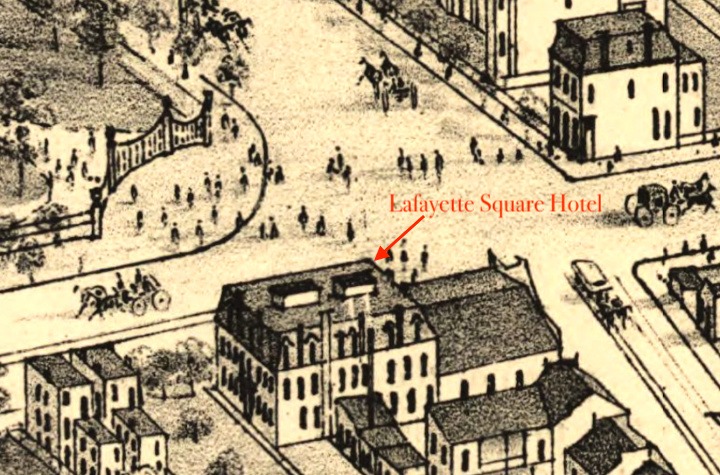 On Compton and Dry’s dreamlike Pictorial St Louis 1875 map, the only commercial building facing Lafayette Park is labelled as #11, the newly built Lafayette Park Hotel. A society section entry from the St Louis Star in 1875 related the following:

An elegant and enjoyable party was given last night at the Lafayette Flats, a new three-story building just completed on the Southeast corner of Mississippi and Park Avenues, just opposite Lafayette Park. This was thought to be a proper way in which to celebrate the opening of the flats. A large hall well-fitted for dancing is on the first floor, and this was prepared for the reception of many guests. The young folks began to gather about 9 o’clock, and by 10:00 the hall was filled with a large and brilliant assemblage. 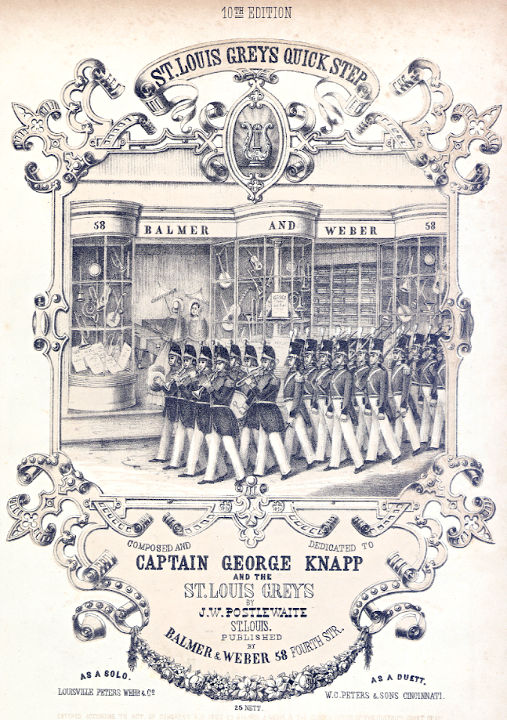 Postlewaite’s full string band furnished the music for the occasion. An excellent repast was prepared in the dining room, and all the substantials and luxuries of the season were to be seen on the table. The guests were invited to partake of this collation about midnight. Dancing was continued until a late hour this morning, when the merry folks returned to their homes well-satisfied and pleased by the evening. A long list of specific ladies and gentlemen in attendance followed. It was quite the kickoff to a new lodging.

A couple of years later, the enterprise had settled down to business. It was prosperous at the time, a sort of extended stay family hotel with large well-appointed suites featuring steam heat, dining room and laundry.

Some of the Delights and Beauties of the Neighborhood as Seen by a Stranger.

A wealthy gentleman making a tour of this country paid a visit to Lafayette Park and its surroundings on yesterday and was so enraptured with what he saw that he wrote the following to be published in the Dispatch. The fervency of the writer attests the popularity of this great resort with all our visitors, and will well repay careful perusal:

St. Louis has two things especially of which she should feel proud, for every stranger coming into the city and visiting its many beautiful resorts will manifest a pride over the fact that Lafayette Park is the property of a city in the United States. The two things referred to are Lafayette Park and the Lafayette Park Hotel or flats. Many may wonder why include a hotel when there are so many other attractive public resorts. My reason is this: the greatest pleasure, in the reach of every one, is doubtless a magnificent park, with its gushing fountains, graveled walks, heavy and graceful foliage, its sweet odors, beautiful flowers, statuary reliefs, velvet verdure and limpid lakes. A place where glimpses of the checkered sunlight go sporting over the downy green and laving itself with scintillating splendors in the falling waters. In the cool and quiet, the rhythm and music of such a retreat, man’s fondest pleasure finds a blissful realization.

The greatest comfort vouchsafed to man, however, is undoubtedly the perfect repose of the body and gratification of the appetite. In order to enjoy life one must have the inspirational indulgences such are afforded by Lafayette Park, and also the bodily comforts and home enjoyments such as are offered by the Lafayette Park Hotel. 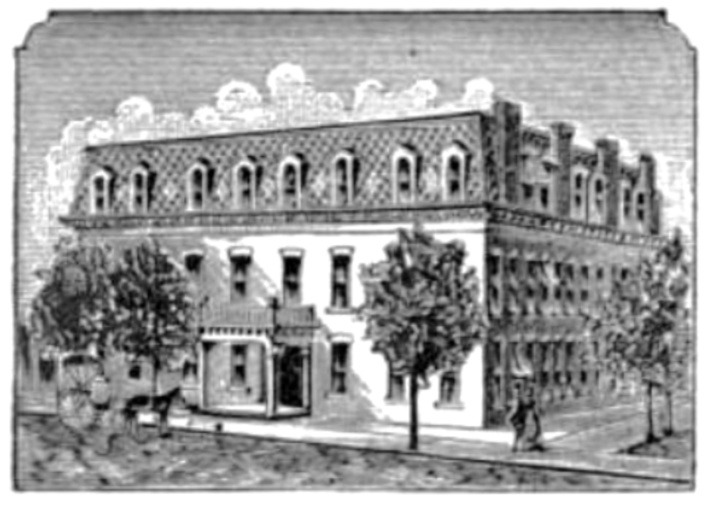 My excuse for making the hotel so conspicuous in this connection is found in the fact that during my sojourn in the city of the past two days, I, by accident, took quarters in the house, and found such superior accommodations that I feel it a duty to give a brief description of the premises, hoping thereby to direct others in the way that will afford them a pleasure equal to that I have enjoyed.

The hotel is located opposite the northeast corner of Lafayette Park, three stories in height, painted a cheerful white color, and in front of the building is a handsome portico with a beautiful grass plat on either side. On entering, the visitor is immediately attracted by the agreeable aspect presented. The wide hallway runs to the rear of the building and crosses another wide hall running lengthwise. The visitor casting his eyes upward will observe the perfect ventilation of the house – every floor being provided with an open balcony, and the apex of the mansard roof is made of glass, and so arranged that it can be thrown open by the mere pulling of a cord. This wise arrangement makes the hotel cheerful and airy at all times.

But it is the appointment and furnishing of the rooms that the greater superiority of the house over our best hotels is manifested. There are 27 rooms en suite and three single rooms in the building, every one of which is furnished as fine as a Turkish harem or the Queen’s blue chamber. The beds are of snow white drapery and the ‘steads are of the heaviest and most costly woods, with dressing cases and stands to match, and the floors are laid with the richest tapestry Brussels carpets. Every room is provided with hot and cold water, bath-tub, saloon and wardrobe, so arranged that every suite of rooms has a private entrance and an abundance of light through several windows, and every window is provided with screens to prevent the entrance of flies or mosquitoes. In the warm days of the 5th, 6th and 7th of this month every room in the Lafayette Park Hotel was as cool and pleasant as heart could desire.

The dining room is on the first floor and is provided with so many doors and windows, each having screens attached, that it is always comfortable, however warm the weather, for there is never a time when a breeze does not blow around and through the park.

The hotel is now under the proprietorship of Col. CN Schuyler, a gentleman who has spent his life in steam boating and hotel keeping, having for many runs conducted hotels in New York, Davenport, and Holly Springs, Mississippi. He is one of the most thoroughly conversant hotel men I ever met, as is proven by the sumptuous table he provides. During the winter and spring past, every room in the house was filled with families, comprising the aristocracy of your city, but Mr. Schuyler informs me that several of his boarders are spending the summer at the fashionable watering places, and that he has three single rooms, all magnificently appointed and furnished, which he would rent with board, all the rooms being on the first floor and always cool.

I don’t desire to “puff” Mr. Schuyler, but I have been so royally entertained and find the Lafayette Park Hotel so far superior to the best hotels I have ever stopped at that I think his house is entitled to my recommendation as given above.

That’s some pretty flowery stuff, but typical of the lyrical praise newspapers would heap on their advertisers in those days. I don’t know if the writer was paid by the word, but it seemed a slow news day, so it ended up on page 5 along with various other news and observations. The lack of attribution, other than to a “wealthy gentleman from out of town,” is a sure indicator of the writer’s commercial interests.

By 1888, it had settled into the area, billed as a “first class family hotel.” In a nod to the modern age, you could book your room by telegram, though it provides no guidance on where to send the request:

The great tornado of May 1896 laid waste to Lafayette Park and much of the surrounding area. One might think the hotel went with it, but it had run aground four years earlier, and was shuttered. In 1894, a five year lease was taken on the building by hotelier William Swan. It was to be extensively remodeled. “When the contractors are through it will be practically a new building.” This is a familiar if often unproductive refrain in St. Louis. It’s always something. Financial constraints resulting from the Panic of 1893 meant no work was done to the hotel, and it reopened in 1895, an outmoded affair in comparison to newer places to stay outside the Square.

In June of 1895, the landlady, Mrs. D. Swan, heedless of her 40 guests and 10 staff members began moving her furniture from the hotel. When the guests went down for breakfast, they found all the kitchen gear, dishes, and furniture piled up for relocation. A general uproar ensued, as no one had been served any notice, and the servants alleged non-payment of wages. For her part, Mrs. Swan declared she was quitting immediately because she was making no money and “could not afford to keep boarders just for her health.” Most of the guests, caught on unawares, slept that evening in the otherwise deserted hotel.

And that actually appears to have been that for the Lafayette Park Hotel, leaving more questions than answers. There is no listing for the 1422 Mississippi Avenue address in the Gould’s Blue Book directories of 1896 or 1897. By 1908, the new Richmond Hotel was opened at 2035 Park Avenue. It later became a church and is now remodeled as an Italianate villa home. 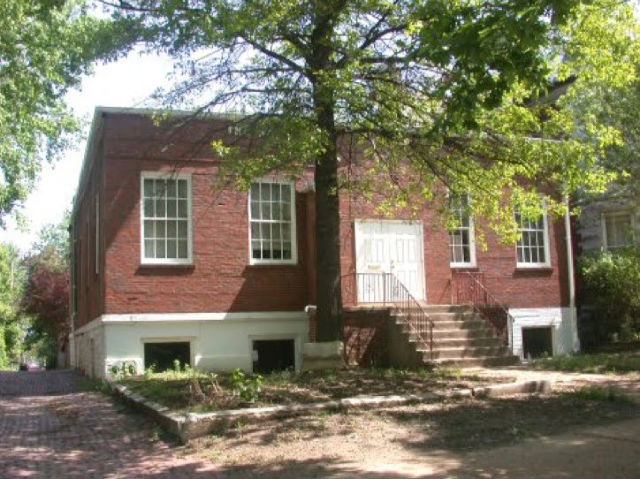 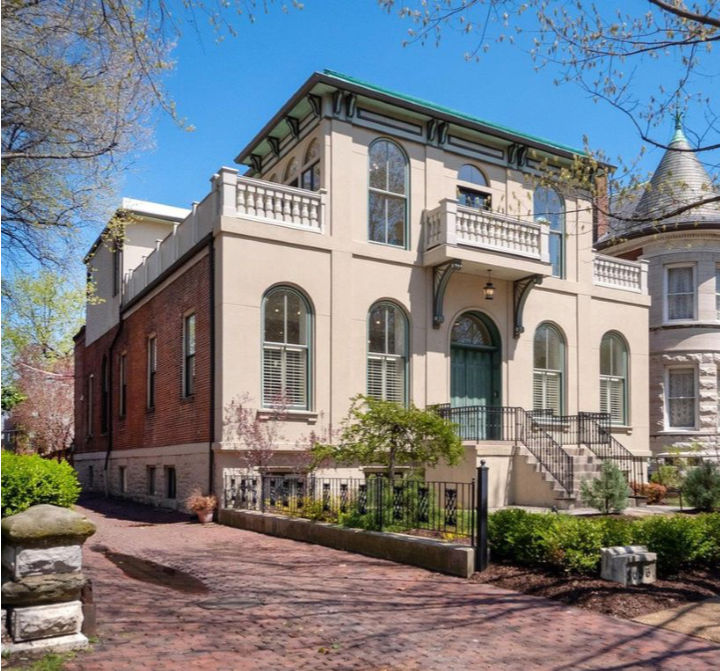 The Sanborn fire insurance map of December 1908 shows the lot cleared on Mississippi. It stayed that way for a long, long time. Enough so that the North wall of the nearest house was painted with a large advertisement for Domino Sugar, remaining distinctive for years. Hostelry was an easy business after 1918, when Lafayette Square was rezoned to allow boarding houses. Former mansions were summarily chopped up into rooms with small stoves and sinks. It was like the coming of Air B&B a century later, disrupting boutique B&B’s right out of business. 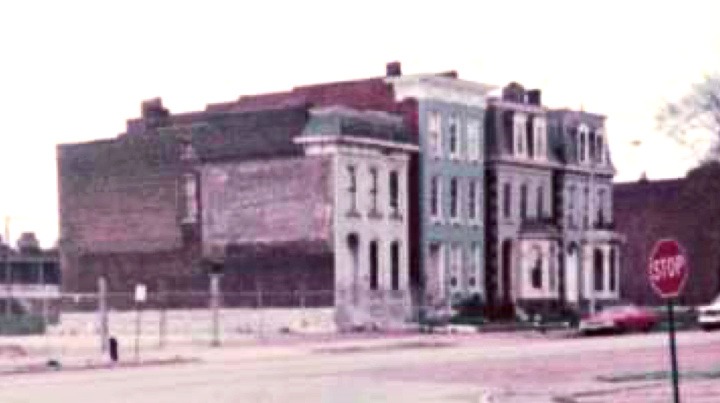 The corner of Park and Mississippi was appropriately called the Corner Place, a low building of dubious ownership in the 70s. It was used by the  neighborhood food co-op in the early 70s, and was razed in 1975. 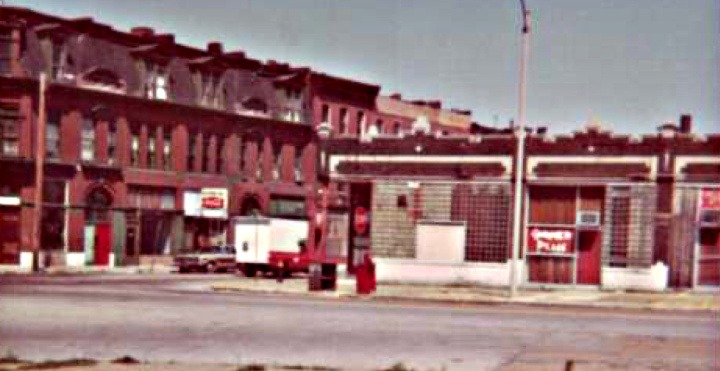 It was a long featureless spell for this corner over the next 25 years. TIF funding in 2001 enabled creation of today’s corner pocket park. Finally, two new three story homes were built on the former hotel property in 2016.

Some things around Lafayette Square take a little longer. 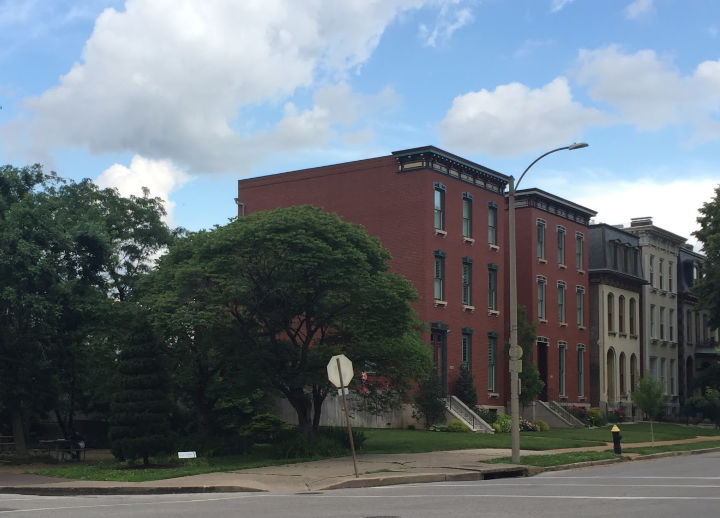 Corner of Mississippi and Park today

Drawing of the Hotel from the Catalog of the Art Collection of the St Louis Exposition and Music Hall. 1886.

An excellent introduction to Joseph Postlewaite, who entertained at the opening celebration is found at https://en.wikipedia.org/wiki/Joseph_W._Postlewaite. He was a noted composer and arranger in addition to bandleader, and often entertained at the Thursday afternoon concerts in Lafayette Park as well as other venues in the region. On the piece of sheet music shown, the band is marching in front of Balmer and Weber Music Store at 1004 Olive Street. Charles Balmer, a prolific composer himself, lived at 1918 LaSalle Street in the Square. For more on this, check out this earlier essay: https://lafayettesquare.org/the-matchless-piano-men-of-lafayette-square/

Doug McDaniel for photos from the 1970s at the corner of Mississippi and Park Avenue.

And to neighborhood Architective, Michael Boyd, for the inspiration to explore this site.